WE HAVE PICKED THE WINNERS!

Thanks again to everyone that participated in the Maxpedition 2017 Photo Contest. It was a tough choice but we have picked the winners. Scroll down to see who won as well as the other great entries to the contest. Our next Photo Contest will occur in Spring 2018, so keep those cameras out and check back to Maxpedition.com for more information.

Prize: Winner's choice of $500 worth of Maxpediton gear! Trevor Tingle from Kailua, HI participating in combat training in Yuma, AZ with the Mongo Versipack.

Prize: Winner's choice of 1 Maxpedition product worth up to $250! Jake Lingo from Tennessee takes in the sights at Box Canyon, Socorro, NM with the Riftcore Backpack ~ “I used the Riftcore as my only bag for a 5 day trip to New Mexico. My partner and I were attending Incident Response to Terrorist Bombings (IRTB) class. This bag was perfect for my trip. I was able to carry all my gear comfortably and organized.”

Prize: Winner's choice of 1 Maxpedition product worth up to $250! Joshua Sidner from Cantonment, FL takes his son, Coda, for a hike along the trails by Perdido River. Josh carries the Falcon-II Backpack, and Coda prefers the Fatboy Versipack.

Barry Latschar from Choctaw, OK shares a photo of his nephew using his birthday gift, the Pygmy Falcon-II Backpack, while hunting in Canton Wildlife Management Area in Northwestern Oklahoma. 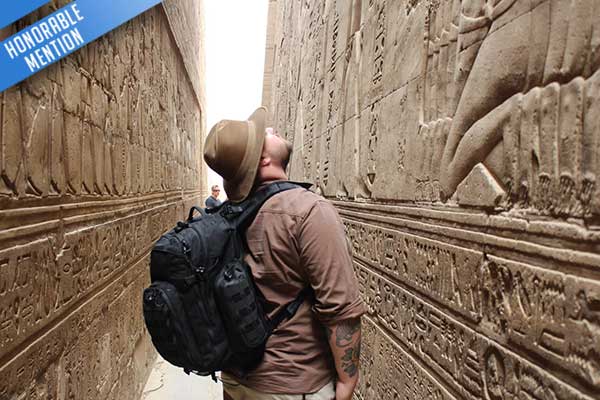 Wes Hopkins checking out the Luxor Temple in Egypt with the Tiburon Backpack. “This is a great bag, we carried it everywhere, and it had our daily essentials as well as our camera gear.” 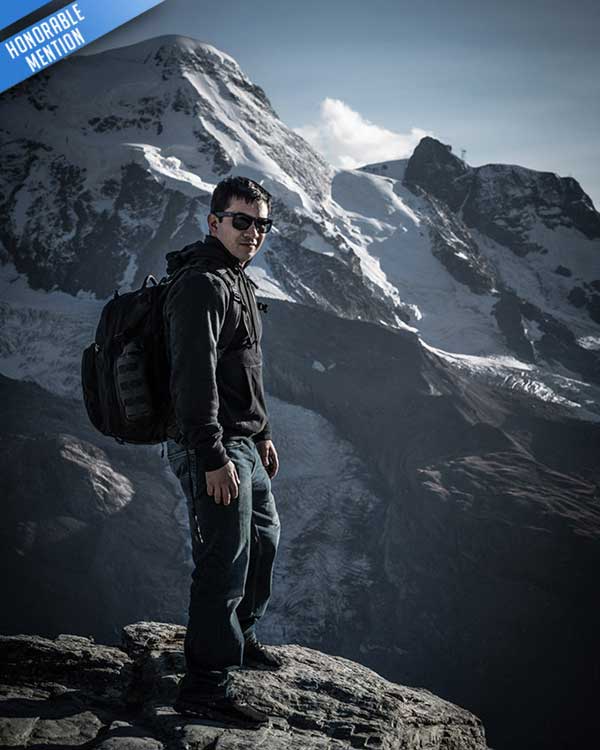 Matt Valenzuela from Oakley, CA heads to the foot of the Matterhorn in Zermatt, Switzerland with the Tiburon Backpack ~ “I’m a huge fan of your products because the design allows me to carry all my photo gear. My experience in the Marine Corps gave me an appreciation for a well-designed pack that is rugged and comfortable. Thanks for all you do!”

Thomas Humphrey from Lancaster, OH takes his son, Levi, and the Sitka Gearslinger out on an afternoon hike. 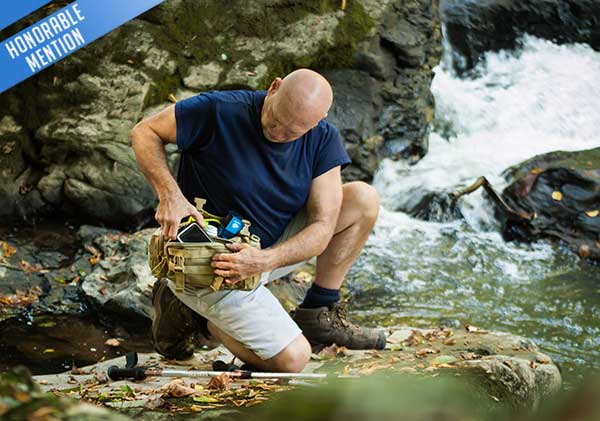 Sean Reeser from Elkton, MD sends a great shot of his dad, Gary, using the Proteus Versipack while hiking in North East, MD. Gary says “All my life I've enjoyed being in the woods, but two years ago I almost lost my left leg to blood clots and it's been in constant pain every day since. I was worried I would never be able to hike again, but my Maxpedition bag carries what I need for everyday life and for the trail so I can still do what I love - even if it isn't easy.” 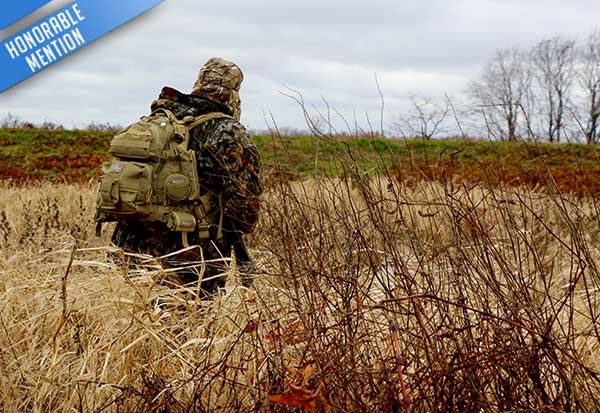 Andrew Eickmeier from Ballwin, MO out for a hunt with the Condor-II Backpack. He accessories his pack with the Cocoon Pouch, Tactical Can Case, Mini Rollypoly Folding Dump Pouch, and D Bag.

MAXPEDITION-IN-ACTION PHOTO CONTEST OFFICIAL RULES. NO PURCHASE NECESSARY. A PURCHASE DOES NOT INCREASE YOUR CHANCE OF WINNING. THERE IS NO FEE TO ENTER THIS PROMOTION. VOID WHERE PROHIBITED BY LAW. OPEN TO LEGAL RESIDENTS OF ELIGIBLE COUNTRIES WHERE NOT PROHIBITED BY LAW, WHO ARE EIGHTEEN (18) YEARS OF AGE OR OLDER AT THE TIME OF ENTRY WHO HAVE INTERNET ACCESS AND A VALID EMAIL ACCOUNT PRIOR TO THE BEGINNING OF THE CONTEST PERIOD.

TO ENTER: To enter, please send your photos directly to Photo@Maxpedition.com. One (1) Email per entry required. The photo must clearly show you or someone you know using/carrying a Maxpedition product. Entries must include the category you are submitting the image to, your full name, Email address, mailing address, and phone number.

Digital images should have a long dimension of at least 2,000 pixels and be saved at 300 dpi (Around 7" or larger). We recommend the file size not be larger than 4 megabytes to ensure a fast upload experience.

Each submitted photograph, in its entirety, must be a single work of original material taken by the Contest entrant. By entering the Contest, entrant represents, acknowledges and warrants that he or she has full power and authority to enter the photograph, and that the photograph does not infringe any copyright or violate any other intellectual property rights. The entrant agrees to indemnify Maxpedition from any and all third party claims arising from the photograph.

Photographs that include sculptures, statues, paintings, and other works of art will be accepted as long as they do not constitute copyright infringement or fraud, provided that entrants must be prepared to provide a release form as described below in "Third Party Releases/Licenses." When photographing the work of others, it must be as an object in its environment and not a full-frame close up of another person's art. Photographs depicting obscene, provocative, defamatory, sexually explicit, or otherwise objectionable or inappropriate content will not be accepted. Photographs deemed inappropriate will be disqualified.

If the Photograph includes other people, you must be prepared to provide a signed written personal release from all persons who appear in the Photograph submitted, authorizing use of the Photograph as provided below in "Third Party Releases/Licenses." If you are unable to provide a personal release, upon request by Maxpedition and in the form provided by Maxpedition, then your entry may be disqualified. You do not need to send the release with your entry. If you win, we will contact you if a model release is needed.

All Entries become the exclusive property of Sponsor, and by entering the Sweepstakes, Entrants agree to opt-in to Sponsor’s email and direct mail list to receive news, specials and discounts.

30% off discount codes will be emailed to entrants within 3 business days of submitting a photo. Discounts are good for all non-closeout / non-clearance in stock items. One discount per customer. Cannot be combined with any other discount code. Discount expires 3 weeks from receiving code.

The Maxpedition-In-Action Photo Contest is open to legal residents of eligible countries where not prohibited by law, who are 18 years of age or older at the time of entry.

Employees, contractors, directors and officers of Maxpedition, its parent, subsidiary, affiliated companies, web design, advertising, fulfillment agencies involved in the administration, development, fulfillment and execution of this Promotion, and the immediate family members of each (spouse, parent, child, sibling, grandparent, and spouse or "step" of each) and those living in the same households of each (those persons whether related or not who live in the same residence for at least three months during the twelve-month period preceding the start date of the Promotion), are not eligible to participate.

Submit exciting images showing off how you use your Maxpedition gear. Clear sharp images of people wearing Maxpedition bags in action will increase your chances of winning. Image topics can include but are not limited to adventure travel, family vacation, at the shooting range, on the job as soldier, law enforcement, first responder, etc. Low quality, pixelated or blurry images will not be judged.

There will be three (3) winners, one (1) per category, who will receive a Maxpedition prize. Prize winners will not receive the difference between actual and approximate retail value. Prizes are non-transferable. No substitutions or cash redemptions. In the case of unavailability of any prize or part of prize, Maxpedition reserves the right to substitute a prize of equal or lesser value.

No cash equivalent or substitution of any prize is offered, except at the sole discretion of the Maxpedition. Prizes are non-transferable, non-refundable and have no cash value. By participating in this Promotion, entrants agree to these Official Rules which are final and binding in all respects. Unclaimed prizes will not be awarded. If a prize, or any portion thereof, cannot be awarded for any reason, Maxpedition reserves the right to substitute prize with another prize of equal or greater value. If for any reason the Promotion is not capable of running as planned, including infection by computer virus, bugs, tampering, unauthorized intervention, fraud, technical failures, or any other causes which corrupt or affect the administration, security, fairness, integrity or proper conduct of the Promotion, Maxpedition reserves the right, at its sole discretion, to disqualify any individual who is responsible or who tampers with the entry process, and to cancel, modify or terminate the Promotion.

LIMITATIONS OF LIABILITY AND RELEASE:

No liability or responsibility is assumed by Sponsor or Promotion Parties resulting from user's participation in or attempt to participate in the Promotion or download any information in connection with participating in the Promotion. No responsibility or liability is assumed by the Sponsor or Promotion Parties for technical problems or technical malfunction which may affect the operation of the Promotion, including but not limited to any of the following occurrences: hardware or software errors; faulty computer, telephone, cable, satellite, network, electronic, wireless or Internet connectivity or other online communication problems; errors or limitations of any Internet service providers, servers, hosts or providers; garbled, jumbled or faulty data transmissions; failure of any e-mail transmissions to be sent to or received; lost, late, delayed or intercepted e-mail transmissions; inaccessibility of the Maxpedition.com web site (the “Web Site”) or Facebook, in whole or in part for any reason; traffic congestions on the Internet or the Web Site; unauthorized human or non-human intervention of the operation of the Promotion, including without limitation, unauthorized tampering, hacking, theft, virus, bugs, worms; or destruction of any aspect of the Promotion, or loss, miscount, misdirection, inaccessibility or unavailability of an account used in connection with the Promotion. Sponsor is not responsible for any typographical errors in the announcement of prizes or these Official Rules, or any inaccurate or incorrect data contained on the Web Site. Use of Web Site is at user’s own risk. Sponsor and the Promotion Parties are not responsible for any personal injury or property damage or losses of any kind which may be sustained to user's or any other person's computer equipment resulting from participation in the Promotion, use of the Web Site or the download of any information from the Web Site. By participating in the Promotion, the entrant agrees to resolve any dispute individually, without resort to any class action. By accepting a prize in the Promotion, Winners agree that the Sponsor and Promotion Parties shall not be liable for any loss or injury resulting from participation in the Promotion or acceptance or use of any prize. Winner grants permission for Sponsor and those acting under its authority to use his/her name, photograph, voice and/or likeness, for advertising and/or publicity purposes, in any and all media now known or hereinafter invented without territorial or time limitations and without additional compensation.

Please submit your images via email to: PHOTO@MAXPEDITION.COM

Thanks again to everyone that participated in the Photo Contest, and don't forget to visit Maxpedition today to save 30% or more on select items! This sale won't last long so get your items today! First come, first served. Not valid with any other offer.  All sales are final.  Offer ends 11/17/17.